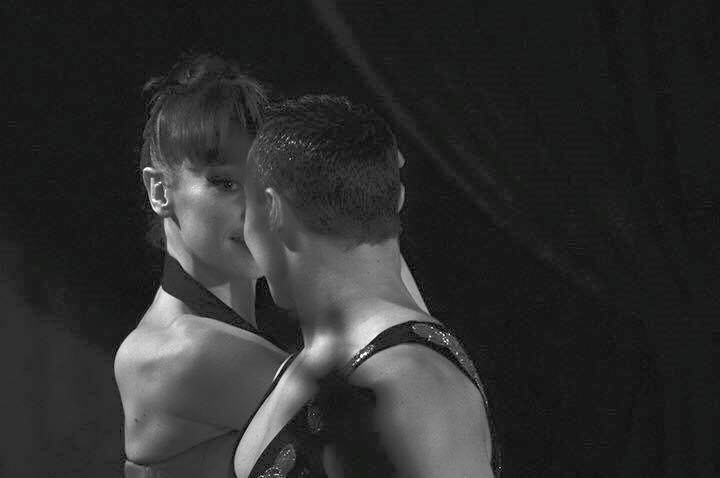 She’s Bénédicte. He, Simon. These two Normans met: in the south of France. She was a dancer. He had already chosen the circus.

Simon discovers the diabolo at 12 years old, he is little present on the school benches. The idea of ​​making the circus becomes stronger and stronger. During a meeting of jugglers, he meets Tom diabolo teacher of the school of circus of Brussels which directs him towards a pedagogical formation. He’s just 20 years old. His diploma of State in his pocket, he does not wish to teach and prefers to continue his apprenticeship. He joined the Cirque Piste d’Azur school near Cannes. There he trades the diabolo, for the Chinese Mast which will become his discipline of predilection. A mix of acrobatics and hard work. After 2 years of school, he is in charge of the CRAC of Lomme where he is perfect with a great master of the discipline coming from China: Mr Tian Chen Xiang.

Bénédicte started dancing at 4 years old. At 12 years she joined the National Conservatory of Rouen Region and then went to Paris to perfect herself with Françoise Legrée, former dancer Etoile. She entered the Cannes Jeune Ballet in 2010 and obtained her DNSP in 2012. She went to the Netherlands to join a contemporary company: De Kiss Moves where she stayed 2 seasons.

It was in Cannes that Bénédicte and Simon met: two different universes but the circus was a real revelation for Benedicte who chose to leave the world of dance. During a tour with the Circus Karl Borsberg Simon begins to form Bénédicte to a discipline of the most demanding which tolerates no weakness: the Chinese Mast.

They combine their talents and sensitivity. The magic operates. A fusional duo where elegance and strength blend together for the expression of rare emotions …